Chan Chan was the capital of the ancient Chimu Kingdom, an empire that existed in Chimor from 900 to 1470 AD. The kingdom was then defeated by the Incas and became a part of the Inca Empire. 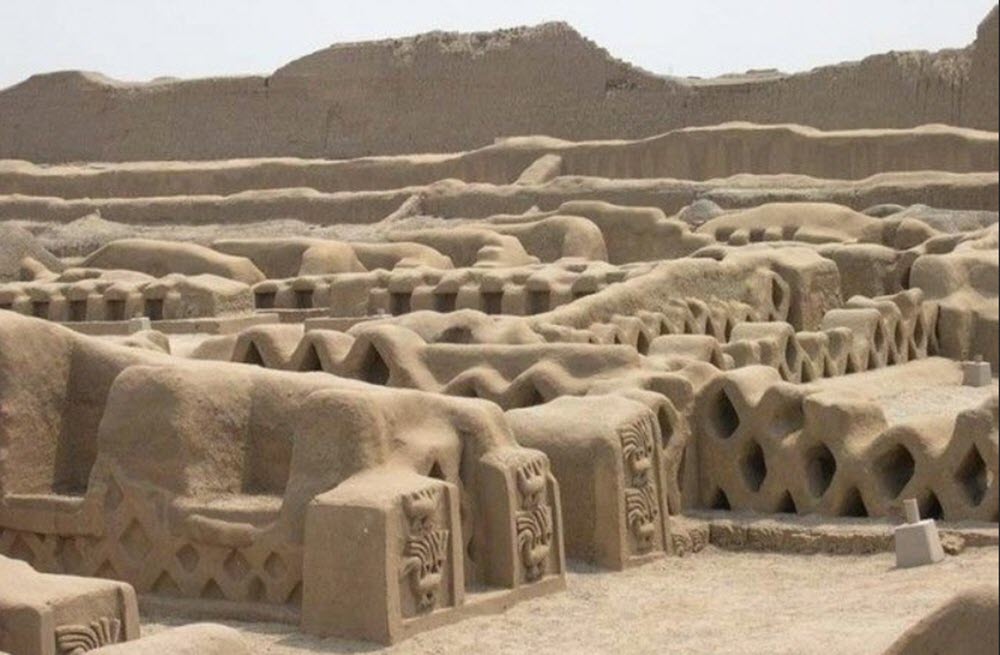 In the Chimú laguage Quingnam, Chan Chan means Sun Sun. The city was named for its sunny climate. It was located in a very arid part of Peru, but two rivers brought in water which was diverted to sustain the city and its surrounding agricultural areas. Also, even though the landscape was arid and recieved a lot of sun, it also recieved a southerly breeze year round which made the climate more pleasant.

Chan Chan was one of the largest cities in pre-Columbian America, and is today a fascination archeological site that attracts both researchers and tourists from around the world. It is considered the most representative city of the now long-gone Chimu kingdom.

The Chan Chan Archaeological Zone was declared a UNESCO World Heritage Site in 1986.

Where is Chan Chan?

Chan Chan is located in the region La Libertad, roughly 5 km west of the city Trujillo. This is by the mouth of the Moche Valley.

About Chan Chan and the Chimu Kingdom

Chan Chan was established in the river valley of Moche (today also known as Santa Catalina), which was then a highly fertile region. Chan Chan was a hierarchically planned city, where both religious, industrial and agricultural activities took place, and the city was sustained by an elaborate water management system, where water from the Moche and Chicama rivers was diverted by an 80 km long canal to sustain Chan Chan and the surrounding region.

At its peak, Chan Chan was approximately 20 square kilometers in size, including the six square kilometer center. The remains of Chan Chan show that the city was laid out according to a strict plan. The centre – known today as the monumental zone – was divided into nine large rectangular complexes, with each complex forming a fairly independent unit and protected by a tall and thick earthen wall. These rectangular complexes (known today as ciudadelas) contained temples, plazas, residential housing, storehouses, reservoirs, and funeral platforms. Archaeologists believe that the ciudadelas were associated with the royal class, since they were so extravagant. The lower classes in the city lived in a more simple fashion.

Around the nine ”citadels”, thirtytwo semi-monumental compounds were built, plus four production sectors used for metal working, weaving, and more.

Agricultural areas existed both east, west and north of the city.